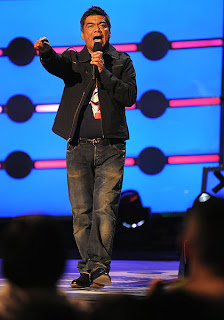 George LOPEZ and Conan O'Brien
I hate to play the Race card, I would like to think that we as a nation have come along way from the days of people of color being pushed aside for white Americans,
but in this case I am definitely drawing the card!

For those of you who may not know much about George Lopez here is a very short recap of his life.
George Lopez became a stand up comedian by using real life events as his comedic act. Soon after, he became one of the first and Original Latin Kings of Comedy.
He broke ground when he became the FIRST Latino to have his own sitcom on a MAJOR television network where he was the main character. The show that was created and co-produced by Sandra Bullock was also named after him! He is also very generous and well known philanthropist. Did I mention that he was approached by Obama for the sole purpose of winning the Latino vote. (I think it worked.)

Although I do not know George nor have I ever met him, I think I can safely say that For George Lopez getting his own sitcom was a dream come true. I would even think its a safe bet to say that George probably didn't think it could get better than that.

Until it did and his world changed as did the world of many LOYAL Latino viewers, whom by the way were upset by the cancellation of his sitcom. The world of late night TV also changed when it introduced its newest big hitter, George Lopez. It was amazing to say the least! It was the talk of all Latinos who were fans of George from the beginning. George got his own late night show this year!

Every one watching The George Lopez show knew that ratings must have been going through the roof for TBS. George was and is booking some very famous Hollywood stars to be guest on his show. Sandra Bullock the lady who helped send both of George's shows into super star orbit, Sean P-diddy Combs, Snoop Dogg, Usher, Slash, Jennifer Lopez, Chris Rock, Lenny Kravitz, Zachary Levi, & Eva Longoria Parker just to name a few.


Im sure every one has heard of the trouble a certain network was having with its two star hosts, Jay Leno and Connan O'Brian. Connan eventually left that network and is set to do a tour of some sort.

And just as George has basically cemented himself as the new Late night show king, TBS is going to move his show back an hour later to make room for the wandering Connan or COCO.

TBS is trying to make this seem as a "joining forces" type of thing and it may very well be BUT, it is WRONG nonetheless!

My question is, why should George have to move his show that is ratings gold right now to a later time slot? Why is Connan being given this time slot that George worked pretty damn hard to create. Connan may have worked for his chance to move up in ranks at his previous network, but he has not paid any dues to just waltz on in and take something that George created. TBS is a basic cable channel, that most of us would have other wise never watched had it not been for George. What gives them the right or the idea that everything will be ok if we move the "Mexican" over and give the gold to the white man who needs a job?

Its not right and its not fair! I will not watch the Connan show on TBS! Its not because I dont like Connan. I actually preferred watching him over Jay, but, this was way before George popped up on the scene. Then I dropped both of them and their lame comedy for George and his real life, tell it like it is style!

Every one knows that Jay and Connan were both losing to George!
Putting Connan in George's spot will not make a difference!

I am using this as my platform to say NO!

No to TBS giving something away to someone who does not deserve it.
The working class Latino demographic that George has bonded with will not stay up until midnight or later. We cant. We work! George is our Late night show King and if you dethrone our king you will see an uprising from his followers. We will not sit back and let this happen.
George may not want to say this and he probably cant for contractual reasons but, I will!

This my friends is an injustice! It is WRONG!
LATINOS and all young fans of George STAND UP!
Lets show TBS that they basically just pulled their own life line!
Lets also show them that we have the power to MAKE OR BREAK a show...
I don't know about you but I just heard something shatter!

Please pass the word.
BOYCOTT THE CONNAN show when it comes to tbs!