Good Monday To you all,
I have to begin today by noting that, I will be trying to go back to the old me. The one who used to write about everyday topics. The one who would see a news story on my favorite morning news show and immediately get on my virtual journal and write about it. Some how, somewhere along the line, my blogging path took a serious turn. Im not sure if it was for the better or the worse. I'll let you know when I find out. I started reading other blogs and found so many ways to make money online, and I must confess that the money hungry monster in me reared it ugly face. I began to neglect my blog and some of my readers. It came to a point that I couldn't find anything to talk about other than money. WELL, money is great, but so is writing. Writing for me is a sort of ventilation shaft, it releases all the steam that seams to build up in me at times. With out this vent, I think I might explode! Dont get me wrong I WILL occasionally let you know about any great money finds. But I will no longer shun real stories. So, to all of my faithful readers, fear not, for I am here, and HERE I AM!

I have to begin by today with a well known person of topic, Ms. Britney Spears.
We all know who this woman is, She grew up right in front of our eyes. She topped the charts with her catchy songs. She teased many men, young and old with her sexy school girl look. Her carrier, much to my dismay was on a rocket straight to the top. She was poised to be a star amongst some of the greatest stars. I mean, this woman sold so many records world wide, that her name was being uttered in the same sentence with the names of the greatest of the greats, the Beatles, Mariah Carey, Elvis Presley and countless others. Some people even had the nerve to say that she was a great singer. BLAH! NOT at all true! I will admit though, she was a pretty good dancer, but thats all the credit I'm willing to give this ex-vixen.
But nowadays, she is on a nuclear bomb headed straight down to reality. You all know the story. The marriage and divorce to a loser. The drug addiction. The alcohol abuse. The all night partying while the kids are at home. And I haven't begun to talk about Britney yet. This is the description of almost all of Hollywood's great stars. But, do we really need to get into that subject? I think I have ranted about that subject enough already.
Now, Britney has taken all of this and added her own drama. A while back Britney had taken a serious spiral downward, and it seems there is no end to her free fall. After her latest drama, a very famous therapist has gone to visit her in the hospital. Who else could help save her soul from hell's grip but none other than DR. Phil himself. He reportedly went to the hospital where Britney is staying and tried to offer his help, at the request of her family. He also reportedly asked her to be on his tv show, which she declined. I really like Dr. Phil, but why does her family want to air more of her dirty laundry for all the world to see. This is precisely what got her in this situation in the first place. Do they not get it? Actually, they don't, they are as unstable as she is. A pregnant 16 year old? I'm not getting into that right now either. She needs to get as far away from tv, the lime light and her so called family and friends as she can. Do you think she can spell ALASKA, or Russia? Don't get me wrong, I think that he should talk to her, he should try and figure out what kind of demons are living deep with in her, and try to get it all out of her before she ends up like the late Anna Nicole. But, the last thing she needs is to be on his show, tell all, and then get grilled by all of the media. I don't know who is totally to blame here. Is it her and her drug and alcohol abuse, is it the media who has been in her face, constantly watching every move she makes since the day she started, or is it the viewer who continues to support shows like TMZ, or Entertainment tonight. These shows try and pretend that they are not the bad guys, that its only the crazy paparazzi that are in the wrong. WEll, wake up every one, Who do you think pays the paparazzi for all those great shots? Its the shows that always seem to have that perfect shot of Britney drunk off her ass. Why do people do that? Why do we give these parasites reason to survive? They all leach themselves off of the famous stars, and then kick them when they are down. Why do we care if Britney or any star gets drunk or stoned? Do you care when your neighbor gets drunk or stoned? Not even sure if they do. But,I know I don't care. I could care less if bob from next door pulled an all-nighter. What does his sobriety have to do with how I live my life? IT DOESN'T! Unless he tries to cause me or my family any harm, I have no interest in his doings. Look, I have my own problems, and DO NOT need to know why or when these people did what they did. I will be honest though. I enjoy watching regular programs, movies, and music videos, BUT, I refuse to watch those types of shows that begin to invade the private acts of celebrities. The ones that tell you were they went last night, who they are dating or divorcing today. I don't want to know what they do on their own time. Just leave them alone, and let them keep making music and make believe movies for the rest of us to enjoy. Thats what we pay them for. I don't care if they are skinny dipping in the ocean with sharks and a bag of crack, when they aren't working. Is that being a hypocrite? Let me know what you think. 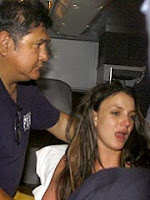 I think it is all very side. Obviously Britney is in need of professional help and her mom should be ashamed of herself. Going on Dr. Phil would be of poor taste. I like Dr. Phil but I've always had a hard time understanding why people would want to work on personal issues on t.v.

All I know is that I feel really bad for those 2 little boys! So sad!

It is very sad. I do feel terrible for those boys. And the new addition on the way. (Her 16 yr. old sister) I wanted to touch on those subjects but that may take a whole new blog site in itself.
I thank God, for everything I have, looking at them I see that it could be so much worse.
Thank you all for visiting!