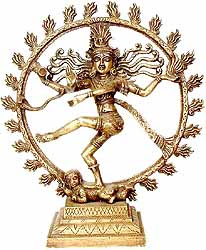 Wow, this is going to be a busy writing Tuesday for me. I want to talk about a couple of things, but first on my list is the 4 year old girl in India that was born with 8 limbs. Yes, you read it right. She was born with 4 arms and 4 legs. Doctors are going to perform a 40 hour surgery to remove her extras. I am in shock and in disbelief. I don't mean to be so insensitive but, I can’t help but write about this poor girl. Doctor’s in India say that they are removing a parasitic twin from the little girls’ body. A parasitic twin is just that, a parasite, a parasite that is drawing the life and blood out of its host. The parasitic twin is not completely formed, but it is formed enough to be living off of her host or twin sister. I can't help but wonder what all of Hindu India thinks and feels about this story.
Let me share with you why I want to know and why I‘m curious to know what Hindu's think about an 8 limbed child being born in their own country.
I took a course in college that studied art and history and religion all in one. It was an amazing class. I almost wished it would have lasted longer. I learned so much about my own heritage and my Aztec roots and the art that was left behind by my ancestors. I also learned about African art, Egyptian art, The Roman Empire and its art, and Hindu religion and its art.

In the Hindu religion there is a Deity, or God named Shiva Nataraja. He was and is the symbol of destruction and creation. Shiva is almost always carved in stone or painted in what looks like an awkward and uncomfortable pose. The pose always shows his multiple limbs. It is called the dance of Shiva. With those multiple limbs it is believed that he creates and destroys the entire universe in a dance using all of his limbs to do so. In other words his dance represents how every thing is created and destroyed and then created and destroyed continuously, and will be for all eternity.

This Deity is a highly revered God too many Hindu's dating back to the 11th century.

I can’t help but feel this strong sense of hesitation for the removal of the little girls extra limbs. I am not a Hindu; I am a Catholic, which makes my hesitation some what ODD. I know that a parasitic (parasite) twin can kill the living and otherwise normal twin, so why then do I have such mixed feelings about this? I don’t know, and I don’t understand why I am feeling this way. What do you think? Go to my CNN news widget above to view the story for your self. Leave me a comment. I got this picture of what an actual ancient sculpture of the God Shiva. The sculpture may be a replica of the original stone sculpture that I studied and was found many many years ago by archaeologist. If you want to know more about the GOD Shiva go to this web site it has way more info on Him than I have time to write about. http://www.religionfacts.com/

This is a very interesting topic and I can understand your mixed feelings. I really knew nothing about the deity Shiva before reading your post. I feel after learning about this, that the little girl almost represents some sort of sign or she's special in some kind of way, while at the same time feeling that the limbs need to be removed to save her life. This is another one of those stories that I just caught a glimpse of last night. You always seem to be keeping up with the current news, which is something I need to be doing more.

Thank you again. Isn't it interesting? I feel like the poor girl needs the limbs off, but just like you said, I wonder if she is a reincarnation, or represents a sign? I guess only God, or could it be GODs will know... very interesting.