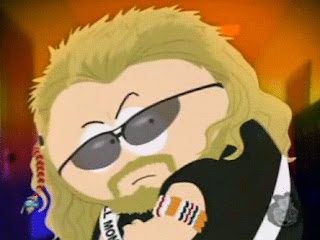 Lets see where do I even start? I know. I AM GLAD that the bounty hunter DOG is off the air! I couldn't stand him then, and I cant stand him now. He is a criminal, in more ways than one. He is an addict. And now it has come to light that he is a RACIST pig, oops, I mean DOG.
I was reading the article at the ABC news web site. I decided to post a comment about him being a criminal. I elaborated on why I called him all those things, and don't you know, I was attacked right away.
Let me explain why, I feel the way I do before I tell you what was said to me.

He has admitted that he is an addict, every one knows that he has served time in prison for crimes he has committed here in the US. So I reminded every one that he is also an international criminal. Dog decided that he didn't care about the laws in Mexico. He decided he was going to make a name for himself by rounding up that disgusting rapist Andrew Luster, an heir to some fortune, and it really doesn't matter at this point what fortune. I cant remember it off the top of my head. Go look it up, if your interested. Any way, back to my point.
Dog, was arrested and held in a Mexican jail for breaking the law. Bounty hunting is ILLEGAL in Mexico. Did he care, no. Well, I stated in my post that, I see a double standard. Why is it OK for him an American, to go to a foreign country and break their law? Why is there no out rage for that action? Why is there so much out rage
when Mexicans come to America, to feed their starving families. They are not here to break te laws, well, not most of them. I'll get to that in a minute. I asked why the double standard? BROKEN LAWS ARE BROKEN LAWS, in any country. It doesn't matter who he was picking up, what matters is that he knowingly did it against the wishes of the Mexican government. He should not get off easy. Like so many immigrants that are in jail waiting to be sentenced for their crime, he should also be behind bars. I am in no way trying t say that Illegal immigration is OK, its not. I and my husband are both Hispanic AMERICAN CITIZENS, and my husband's salary is being directly affected by the illegal employees. Illegal immigration needs to be handled, but it needs to be handled in a humane manner. I am just tired of the double standards in America. Why can he get away with what he did, while I'm called vulgar racist names? I really think it shows a persons ignorance and lack of education, when instead of holding a healthy conversation or debate, they resort to RACIST name calling. I refuse to post what was said to me. But let me put it this way, It takes allot to actually insult me, and that poster insulted me and my intelligence. It seems that for that person, it is OK for Americans to go to other countries and break laws, the people of other countries are only scum and deserve no respect. And Americans wonder why the world hates us. I said US, I am an American Citizen. I am a proud Hispanic. I will always be proud of my heritage. I will not, though, stoop to the level of the cowards that HIDE behind their desk and write vulgarities that they would NEVER have the courage to say to my face or to any ones face! I dare someone to say those things to my face! I DARE THEM! Good luck. I chose a catoon picture of dog, because that is what he and his supporters are JOKES!
Love
Melissa

I'm so sorry to hear Melissa, that you had to experience such hatred towards you. You're right about one thing though, they're nothing but cowards sitting behind a computer screen. Totally agree with you on that. I agree with your whole post, in fact! I'm on your side with this one.

Thank you, Amanda. Its really good to know that Im not the only one that feels this way.
Thank you again.