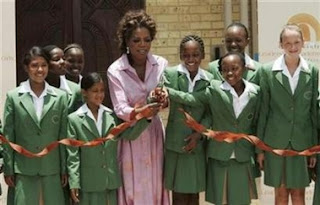 Happy Monday!
Is there such a thing as Happy Monday? Yes, even a work at home mom dreads Mondays. So much to do and so little time, if you want to run an efficient, clean and organized home, But this isn't what I want to talk about. I want to talk about something I saw on TV this morning that really bothered me. It is really not an important world issue, but it just bothered me. I saw Oprah on Good morning America in a press conference, talking about the poor abused girls in her school in Africa. So I decided to read more about it online. When I get to he site to read about it, I also read the comments on the page. I must say the comments posted really ticked me off. People were so upset with Oprah, because she doesn't spend enough money on humanitarian projects. UH, HELLO, where has this person been for the last decade? Every one knows that Oprah spends and raises millions upon millions of dollars for people all over the world. She helped build an entire block of homes in Louisiana for Katrina victims. She has the angel network Charity,that has helped establish scholarships and schools, it also supports women's shelters and builds youth centers and homes all over the world. Now Oprah opened a $40 million dollar
(of her own money) school for African girls to attend so they can go to school with out worrying if they will be raped or killed or both on their way. How many people do you know have done as much for their community let alone the world. Unfortunately, there have been allegations of abuse in that school by one or some of the staff. I don't know all of the details yet, but it seems that one of the teachers or as they call them "matrons" sexually and physically abused a few girls at the school. If you want the exact details go to Good Morning America's web site. It seems that one certain reader thinks that Oprah should spend all of her hard earned money on more than just her own happiness. Oprah should not enjoy her wealth. She should "donate 90% of her money". Oprah shoud be ashamed that she has so much for her self. I'm sorry but I was in shock when I read that. I don't understand why she should give away every penny that SHE worked hard for. Let me see, why doesn't the person who posted that comment give away 90% of their hard earned money, lets see how quick he/she would do that. Oprah doesn't have to do anything with her money. She worked for it, and she deserves to live life the way she wants. If that means living life in luxury, then she should. Who are we to judge? She wasn't always rich, she was dirt poor as a child. She has accomplished the American dream. Now that she can, she has every right to enjoy her dream come true, as do we. I say leave that lady alone. Be glad she helps anyone, she actually makes a difference in peoples lives, unlike some of the Hollywood types. Must I name names? Hillary, Britney, Paris, should I continue? I don't have time to watch her show these days, but I am a fan. I am a fan of anyone that sees beyond the race and color lines and sees that Humans are Humans and every one deserves to be treated as such. No one deserves to be abused or neglected anywhere in the world.

It's funny you should choose to write about this today, as I just happened to catch a glimpse of this story this morning. I thought of going online to read further about it, but didn't. I also am a fan of Oprah and it is appalling to hear such statements made by people, knowing how much Oprah does donate. These people are clearly ignorant!! I support her totally.